BELTANE
Falling on May 1, this holiday is the last of the fertility festivals in the wheel of the year, and celebrates the union of spring and summer, male and female. I like to view this season as the time of courtship between the God and Goddess.

In Druidic society, Beltane marked the time of the year when the cattle were driven out to pasture. These cattle were first driven through purificatory fires to rid them of disease and illness. Fire plays an important part in the rites of Beltane. Sacrifices by fire were performed in ancient times; in modern times, a person is chosen to jump over the sacred fire while others clap and sing.

Oatcakes are traditional to the season, as well as the dance of the maypole. The intertwining ribbons on the pole represent the union of the male and female principle, while the pole contains an obvious phallic symbolism. Beltane is also known as Walpurgisnacht, made famous in the tale of Faust.

Followed by the Summer Solstice, the wheel of the year continues to turn, and the “holiday” series of my blog concludes – hope you enjoyed your year long lesson of Sabbat histories from ancient times 🙂

Some call this. Sabbat “Ostara”, a name which echoes in the origins of Christianity’s Easter. No matter the title, the symbolism is essentially the same, for this is the first day of spring.

This is the fertility festival of vegetation – everything is once again green with new life, and swelling with unopened blooms and the promise that is to come. Babylonians recognize it as the new year; Greeks held the Festival of Dionysus at this time, and the Romans had their Lupercalia. The Christians’ “last fling” of Shrove Tuesday is Paganism’s “first fling”, celebrating the “light” half of the year.

The Sabbat of the Spring Equinox is used to honor the Maiden Goddess aspect, and the Young King who feels First Love. It is a good time to plant seeds, symbolic of new beginnings. It is also a good time to start working on any long-term goals that you may have. Milk, flowers, honey cakes and decorated eggs are offered to the God and Goddess on this day.

May the seeds you plant this season flourish and bear wonderful fruits! 🙂

The first holiday of the Celtic year, Imbolc falls on February 1. Some practitioners prefer to celebrate on February 2, or Candlemas, but I prefer February 1 as the Sabbat day as well. If you will notice, all the other cross-quarter Sabbats fall on the first day of the month, or the eve before; this is because the Celtic days were counted from sunset to sunset, instead of sunrise to sunrise. I feel that rituals should be held on the eve of the Sabbat, and that a public festival should be held on the Sabbat day.

Imbolc is the first fertility festival of the year and is symbolic of the time when the ewes come into milk.  Cattle usually give birth at the end of the winter season, and goats always seem to have their kids on the coldest night of the year.  This holiday represents the union of winter and spring – the first stirrings of consciousness in a cold and slumbering world. This is the time when we sweep out the old, so that new may enter. In Europe, one way Imbolc was celebrated was with a torchlight procession; this flame magickally purified and fertilized the fields before the seed-planting season.

The birth of the Young King occurs right after the Winter Solstice, and by the time of Imbolc he is a young lad. This holiday is when the Young King is to be named and armed. The role of the Goddess is still ambiguous: some choose to honor her in the aspect of the Mother of the Young King, others honor her as the Crone Goddess of Winter.

Ste. Bride (Brigit, Briid, Brede, Bridget) is the most commonly worshiped goddess on this holiday.  She is lady of the home and hearth, and candles are kept burning all night in her honor.  Another European custom is that of Brigit’s bed. Before retiring on Imbolc Eve, a corn dolly is made and placed upon a small bed.  The dolly is covered with a handkerchief, and an invitation is made to the goddess Brigit to come and spend the night.  Modern rituals often include the wearing of a crown of candles, and the ceremonial “sweeping out” of the circle. 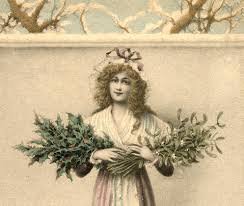 WINTER SOLSTICE (YULE)
In seasonal myth, the Winter Solstice is the time when the Old King is dead, and the Young King has not yet been born; for this reason, some religions will place the seasonal emphasis upon the God aspect. Once again, I must stress that it takes two to create, and therefore I feel that a Goddess aspect must be recognized as well. The Druids realized this need, and paid homage to the Crone at this time.

The Crone is a fitting aspect for the Goddess in the winter season. During Yule, we pray for the rebirth of the sun (son), and who better to assist with the birth than the aspect of the Midwife? The Crone is the patroness of the winter season – remember, she is Goddess of death and rebirth – her recognition during the dark of the moon is but a reflection of this fact.

Yule is also the season that forces us to look within our selves, due to the cold weather and long nights; this is something for which we should give thanks. We are never given enough time in our lives to examine our minds, our thoughts and feelings and to appreciate ourselves for who we really are as people, Nature gives us an entire season in which to do this.

There are several ways to celebrate Yule, it simply depends on which aspect of the season you wish to place your emphasis. If you wish to bring back the sun from its winter hiding place, burn a single, consecrated log overnight and give the sun your energies. Because winter is such a social season, you may want to do something-that is a little more involved and festive, like a seasonal reenactment or mystery play.

Happy Holidays and best wishes for a wondrous New Year!!! 🙂

May a Bountiful Harvest be Yours!

This is the second of the harvest festivals, marking the fall point of equal day and night. Because of this equality, both God and Goddess are honored. In many magicks, you will read about the “in-between” times and places – midnight and noon, crossroads and doorways. Places and times that fall exactly halfway are conditions in which the veil between the worlds is at its thinnest. This is a good time to work on focus and balance.

I would like to point out a few things about the harvest time, In agricultural societies, the harvest season is hardly a time of frivolity. Everyone in the community is involved in the harvest; children do not even begin school until the season has passed. In other words, the cultures to which these harvest festivals are attributed do not have time to be festive during this season. This is not to say that there are no harvest festivals in agricultural society; I just feel that they only recognize one of the three that make up the harvest Sabbats of Witchcraft. Autumn Equinox is sometimes known as the “Witches’ Thanksgiving”.

Here’s wishing you all a wealth of balanced abundance! 🙂

There are eight holy days that are celebrated in the religions of Witchcraft; these are known as the Sabbats. These days fall on the quarters and cross-quarters of the year, and are symbolic of the seasonal changes and the cycles of life itself. It is my opinion there were not that many Sabbats when Witchcraft first became a religion; the additional sabbats are a result of the religion’s global evolution. We must remember that Witchcraft is a nature-based religion, and therefore the changes in the seasons are highly significant. Through the use of stone calendars and observation of the skies from temple rooftops, the exact day of each seasonal change was determined and declared a holy day. These calendars and temples of our Pagan ancestors have withstood the test of time, and can still be seen today.

Seasonal changes are the result of solar changes; therefore these four holidays are constant in all religions of Witchcraft. Some Witches refer to these holidays as the “Lesser Sabbats”, but I do not see how days that Nature itself has deemed sacred can be considered “lesser” than the other four sabbats. The so-called “Greater Sabbats” were created by mankind. A majority of their symbolism comes from the Celts. The Celts were a cattle-raising society, and the other four Sabbats mark the days of the birthing season, and the times when the herds are taken out to pasture and returned. These four Sabbats fall halfway between each solstice and equinox.

The Sabbats of the Witches reflect two different cycles – the cycle of the seasons and the cycle of life. Because of the primitive belief in Animism, these two cycles intertwine heavily with each other in their symbolism, and over the ages, the seasonal changes became associated with the divine myth of death and resurrection. The solar cycle became symbolic of the life cycle of the God/King – every year he grows, loves and dies, only to be reborn again.

In every society is found a cultural myth of resurrection. In the Egyptian society, Osiris is seen as the God of the Grain, The story of his life is reflected in the agricultural cycle of the sowing and the harvest. In some societies, the Goddess is the focal point of the resurrection myth. In the story of Ishtar’s descent, the Goddess travels to the Underworld to ask her sister, Ereshkigal, for the return of her dead lover, Tammuz. While Ishtar is there, the earth above lies barren and desolate until her return. A similar tale is that of Persephone – the difference lies in their willingness to go to the Underworld, and in their subsequent reactions. Ishtar went willingly, but chose to love life over death; Persephone, on the other hand, was taken to the Underworld against her will, only to fall in love with the very King of Death himself.

In the Pagan year, there are three festivals of fertility and three festival that are dedicated to the harvest. I feel that this is because as agricultural societies grew, they recognized certain times of the year for the planting and the harvest. These times differed according to climate and geographical location, and were all eventually combined with the two solstices to create the Wheel of the Year that Witches recognize today. I have also noticed an underlying symbolism in the arrangement of these holidays, and often wondered if it was all some grand maneuver of the Collective Unconscious.

When placed together, the fertility festivals each focus on a different plane of earthly existence. This same current is noticed in the progression of the harvest festivals as well, Imbolc is indicative of animal fertility, Spring Equinox celebrates the fertility of the vegetation, and Beltane ribbons are intertwined to represent the joining of the male and female. The energies of these three Sabbats culminate with the fiery passion of the Summer Solstice, and the harvest festivals begin. Animals born during Imbolc are weaned around the time of Lammas, we give thanks for the harvest on the Autumn Equinox, and the festival of Samhain can be viewed symbolically as the time of the harvest of human souls. The harvest Sabbats are followed by the Yule season; its long nights keep us “in utero” until Imbolc and the birth of Spring. The wheel of the year turns.